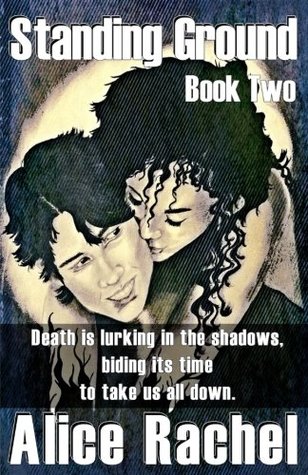 When the authorities strike to regain control over the riots in Eboracum City, the citizens are forced to fight back to survive. A virus has spread through the Underground, taking down the refugees one by one, soon contaminating the rebels. If Thia wants to save the ones she loves, she will have to retrieve the cure, quickly. But certain decisions are costly, and not all actions are free of consequences.

**I want to thank the author, Miss Alice Rachel, for providing me a finish copy of this book in exchange of an honest review. This, by any means, did not affect nor influence my review.**

I was welcomed back in their misogynistic society by the main characters, Thia Clay and Chi Richards, and the rebel group, Underground. Standing Ground started where Under Ground left off. It also contains additional materials that will satisfy your need for the side characters’ stories.

I regret waiting for so long to read this. I’ve read Under Ground more than a year ago and I was glad that there was actually a recap of the first book before this started. I mean, can we also do that on other series, dear authors?

Alice Rachel’s writing got me so carried away you’ll see my face change emotions numerous times within an hour. A book of so many emotions, fast-paced, I was welcomed with problems and conflicts, keeping the story alive with no boring chapters from the start until the end. The romance killed me. Grin, giggles and smiles were impossible to suppress. Danger, surprises and painful moments were also there. The emotions Standing Ground wants the readers to feel were perfectly balanced. It took me high and also took me low. The improvement in Thia’s character was apparent. Though, I still get irritated by her innocence, how easy it is to deceive her and how her emotions keep on getting in the way. But I like that she’s still the kind, I’m-trying-not-to-be-naive-anymore girl. Chi didn’t disappoint. Still has that capacity to make me swoon, still that guy with the bad childhood, broken, but is trying his best not to let that get in the way of his relationship with Thia and their mission as Under Ground rebels. He totally made me fall for him and is now one of my fictional boyfriends. And the end was a cliff-hanger that made me look forward for the next installment without annoyance but pure excitement and curiosity.

What I find lacking is the spotlight shown on their society and the issues this book was trying to discuss. Instead, we focused more on the characters. I’m not entirely disappointed but I wish the revolution part was balanced out with the romance. Instead, it became 65% romance and 35% rebel stuffs. I also don’t like how a death of a certain character was just swept under the rag. Lastly, I was surprised and disappointed by the double standards of Chi and Thia. First, Chi was so fast in calling out Thia’s mother with her double standards – which was great – yet, he’s also the same. He fought with her mother telling Thia can protect herself and do things on her own without relying to a man, yet there’s an instance where he’s the own who won’t let Thia deal with things and act as if Thia can’t handle them alone. Second, Thia joined Under Ground because they are fighting for women’ rights, for people to stop objectifying women but there’s one scene where Thia herself referred to her body as a “trophy”. It totally ruined the moment and I almost canceled this book. I’m hoping for this matter to be discussed in the next installment.

Overall, the emotions it made me feel, how it gripped my attention all through the end, and everything I loved outweighed all the disappointments I felt with this book. I was right to expect more after reading Under Ground. Standing Ground proves that continuing to read this series is worth it. This series is getting better and more exciting. If you want hot, heart-melting and cheeks-burning romance, painful and dangerous moments with rebels fighting an oppressive system, pick this up.

Alice Rachel comes from France and now lives in the USA with her hubby and her three crazy guinea pigs.

Besides drinking way too much coffee, Alice spends a lot of time reading, writing, or drawing. She enjoys well-written antagonists, flawed heroes, and talking about book characters all day.

She’s the author of the “Under Ground” series. Alice loves talking to her readers, so send her a text message or a tweet.

Have you read Standing Ground or just started the series? Are you going to read the next installment? Share your thoughts below!