Today, I have a very special guest on the blog. She is one of my newly favorite adult fantasy authors and she’s no other than… the Fonda Lee!

Fonda Lee is the author of the Green Bone Saga. I recently read and reviewed the first two books in the series, Jade City and Jade War, and definitely fell in love with them! Having Fonda Lee, our Pillar, on the blog means so much to me and I am so grateful that I was finally able to ask some of the questions I have been wanting to ask (and tell her just how much I love the Green Bone Saga and shamelessly fangirl, of course).

Without further ado, here is my interview with Fonda Lee. I hope you’ll enjoy as much as I did!

Karina: Hi, Fonda! Welcome to Afire Pages! I am extremely honored to have you here. And thank you so much for giving us your time.

FONDA LEE: Thank you for having me here!

Karina: I am in awe and impressed of how you incorporated economic issues in the Green Bone Saga. I was really curious on how were you able to do that. When I’ve learned that you have Bachelors and MBA in business and took Economics subject/s, plus you were a corporate strategist, it suddenly make sense. And because of that I admire you so much as a newly Economics graduate. I genuinely think I’d learn so much from you. Anyway, I’m gonna stop here. I  just want to take this opportunity to fangirl. 😍 lol. My first question is…

What for you is the importance of discussing political, economic and military issues in fantasy books?

FONDA LEE: First of all, I’m so glad that you’re enjoying the Green Bone Saga! In answer to your question, I want the fantasy novels that I write to feel as real as possible. One of my goals with these books is to make readers feel as if Kekon and the world of the Green Bones actually exists and they could get on an airplane and visit it. Political, economic, and military issues are always present in our own world, so when I read a fantasy story that seems to ignore basic things like currency and trade, I can’t fully believe in it. I’m always aware that it’s not real and that I’m reading about something that can’t exist. For me, personally, that gets in the way of true immersion. So I write about Kekon as if it’s a real place, with the goal of making my readers believe in it as much as I do.

How was the process of incorporating economic, political, and military situations to the plot like? Can you walk us through it? And how did you decide that those situations will fit the story?

FONDA LEE: They come from my own imagination, but of course everything I write is informed and influenced by things I’ve experienced, or learned about, or researched. It’s a process of constantly asking, “So what would likely happen, if this was the real world?” and thinking about the economic and political angles. For example, if there really was magic jade in the world, then of course some powerful military would go about developing a drug so it could be used for their purposes. I research how similar geopolitical circumstances played out in our world; the Oortokon War is not based on any one war, but I researched a number of proxy wars that happened during the Cold War in order to give it the right “feel.” As for deciding which situations fit the story? The ones that cause the most trouble for the characters! At the end of the day, the story is about the Kaul family, so I always come back to focusing on what will be worse for them. That’s what moves the story forward.

Karina: This question was based on one of Maro’s opinions in the book and I’m especially curious about this.

Do you personally think that jade ought to be treated like any other resources with its supply and demand being solely dictated by the open market, instead of it being controlled by the KJA and it being treated differently—given that it’s exclusive to Kekon and is a huge part of the country’s cultural heritage? Why or why not?

FONDA LEE: This is tough to answer, because I see the economic merits of Maro’s point of view. If the supply of jade was dictated by the open market, it would curtail the black market and the criminal activities of people like Zapunyo and reduce the power of the Green Bone clans (which, some people, like Maro, would argue to be a good thing). On the other hand, given how important jade is culturally and spiritually to the Kekonese people, I don’t think it can be treated like an ordinary commodity. Many countries employ government protection of industries that are deemed too important to the nation’s economy and identity to be subject to pure capitalism. For example, it might make economic sense to allow the clearcutting of the Amazon rainforest, but that doesn’t mean we should do it.

Karina: If Jade City had been stressful for The Pillar of No Peak Clan, Jade War has certainly been more stressful. As a Pillar, Hilo had to always weigh things down. Often times, he had to choose what to prioritize – politics, business, or culture.

If you’ll be transported to the masterpiece of a world that you created and become “Fonda Lee, The Pillar of No Peak Clan” instead of that being Kaul Hiloshidon, would you prioritize politics and business than respecting your Kekonese culture?

FONDA LEE: I’m glad I’m not the Pillar of No Peak, because I don’t know how I’d deal with the terribly difficult situations that I set up for my own characters! Even though, like Shae, I have a business and economics background, I believe there are things far more important than profit. Economic growth and modernization are important, but they would have to be considered alongside what’s the right thing to do for people, and losing one’s culture might be too high a price to pay. In that respect, I’m with Hilo—because he does think first and foremost about his obligation to other people.

What are the Green Bone cultures you like and dislike the most and why?

FONDA LEE: I like how Green Bone culture places a high value on family, honor, and friendship. The downside is the cronyism, nepotism, and patriarchial practices. I think Shae would agree with me.

FONDA LEE: I really enjoy writing sex scenes! And yes, they feel like writing fight scenes (which I also love, obviously). Fight scenes and sex scenes are both about characters relating in a very physical and emotional way. There will be sexy times in the third book, I’m sure.

Karina: I don’t wanna be a bish but I just have to know. Let’s say you’re not the author and you don’t have anything to do with all the things that happened…

Between Tau Marosun and Woon Papidonwa, who do you think is more compatible with Kaul Shaelinsan and who do you ship, Shaero or Shaewo? And why? (yes, I just made up those ship names and I’m a Shaewo shipper by the way)

FONDA LEE: Oh gosh. Well, Tau Maro is modern in his thinking and an intellectual equal for Shae. Woon Papi is the sort of person who will always be there for her and quietly gets things done, plus he’s clan. I guess if you’re going to make me choose, I’m a Shaewo shipper. 🙂

Karina: Thank you so much for you time, Fonda! You have no idea how grateful I am for this opportunity. I cannot wait for Jade Legacy. And please continue blessing us all with your works. ❤

FONDA LEE: Thank you, Karina, for your great questions and your enthusiastic support! 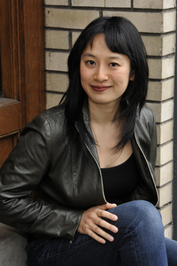 Have you read the Green Bone Saga or any books by Fonda Lee? Are you a Shaero or Shaewo shipper? Did you enjoy reading the interview? Share your thoughts below!

2 Replies to “Interview with Fonda Lee”